Alcidion Managing Director Kate Quirke said, “We are very pleased with the continued momentum of Alcidion in the first quarter. As a result of several new contracts that were signed during the period and a greater stream of recurring revenue to be recognised in FY20, the Company is well placed to continue to deliver growth during FY20. These new contracts represent an important indicator of our increasingly in-demand offering as global healthcare embraces digital solutions to improve care.

“Our recently announced contract with Healthscope marked an important milestone, representing the first private healthcare customer for data and analytics, demonstrating the value of Alcidion’s capabilities across both private and public healthcare.

“As a result of the cash surplus from operations, stronger sold revenue pipeline, and our first entry into private healthcare for data and analytics, Alcidion remains well placed to deliver growth in FY20 and beyond.”

During the quarter, Alcidion signed several new and recurring contracts, with a total contract value of $2.54M. A total of $1.24M of this sold revenue will be recognised in FY20.

During the quarter Alcidion signed a three-year agreement with private healthcare provider Healthscope to provide a solution supporting its data and analytics strategy across 43 hospitals. This contract is significant for Alcidion, as it is the first implementation of its data analytics capabilities into a major private healthcare group. The value of this initial contract is $895K, a significant portion of which will be recognised in FY20 with the rest to be recognised over the next two financial years.

Subsequent to the end of the quarter, we have also signed a new Smartpage contract with an existing customer in New Zealand. While this contract was below the threshold for separate disclosure to the market, it demonstrates the cross-selling opportunities that exist amongst our current client base. 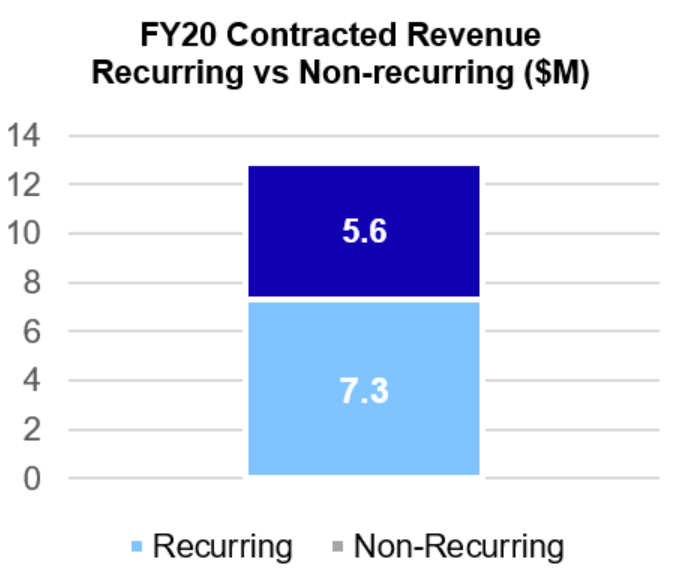 In August 2019, Alcidion launched its new brand, consolidating MKM Health, Patientrack, and Oncall into one cohesive Alcidion brand. The launch of Alcidion’s new brand is the final stage of the investment in integrating the core businesses and capabilities of the companies acquired by Alcidion in 2018.

Alcidion also announced changes to its Board with the appointment of Rebecca Wilson as Non-Executive Chair with the former Chair Ray Blight remaining as a Non-Executive Director.

Alcidion delivered a net positive cash inflow in the first quarter with a surplus of $136K generated from operations. This represents Alcidion’s third consecutive quarter of positive operational cash flow and its fourth since the beginning of FY19.

Available cash reserves were boosted to $4.4M, an increase of $840k for the quarter, which is the result of the operational cash surplus and $700k in capital funding being paid into Alcidion as a result of options being exercised.

Cash receipts from customers for the quarter were $4.8M which was 6% down on Q1 FY2019 ($5.1M), due to two UK customers paying upfront for new large UK contracts won towards the end of FY19 with no cash therefore being received from these contracts in Q1.

Our expected cash outflows for next quarter ($6.3M), are significantly higher than those in Q1 ($4.7M) due to some Q1 expenditure being deferred and planned increased investment in staffing and marketing in Q2 which is aligned with the company’s business plan to enable continued growth in FY20 and beyond.  The Q1 deferred costs were primarily payments due to business partners, the timing of which is linked to customer receipts as well as deferred tax obligations in the UK due to changing the company name. The expected average of expenditure in the two quarters (~$5.5M) is more indicative of likely operational outflows in future quarters.”