Investing for growth in a favourable market – solid start to FY2020

Alcidion Managing Director Kate Quirke said, “We have seen a continued strong uptake of our technology and services in FY2020, and following the very well supported capital raising totalling $16.2M in November 2019, we are now actively investing to accelerate growth and to further evolve the platform to ensure we capitalise on the rapid shift taking place in the industry, as global healthcare providers look to technology to improve the delivery of healthcare”.

“Our sales grew quarter on quarter, in a period where we focused on on-boarding new sales staff and invested in platform enhancements. Due to seasonality in healthcare procurement, and the more certain position around the general market in the UK, we anticipate stronger sales during the second half, for both the ANZ and UK regions.

“During the quarter, we launched Miya MEMRe which we are confident will see strong customer take up as a result of the increasing demand for mobile EMR technologies. We have recently concluded a trial of the product at Wagga Base Hospital and look forward to opportunities to roll this product out following the trial.

“So far this year, we have already signed several sizeable contracts of strategic importance in the UK, which represents our primary target market, providing important reference sites in the NHS. With a recently appointed GM of Sales and Business Development, there is a strong focus on delivering new contracts as well as capitalising on the increasingly favourable operating environment post the general election, as policy makers are signalling an era of significantly increased investment in technology for the NHS.”

The placement provides funds to accelerate the Company’s growth strategy through investment in sales, marketing and clinical support resources to drive market adoption in the UK, Australia and New Zealand, as well as explore additional opportunities in new markets. Execution of the accelerated growth strategy commenced in Q2 FY2020.

The Company increased investment in sales and marketing during the quarter, appointing Lynette Ousby as UK General Manager for Sales and Business Development. The Company has also appointed Sales Executive Rebecca Rodman in January 2020 to drive product and services sales across our southern region in ANZ. There are plans to further increase investment in sales and marketing in Q3 FY2020, with the appointments of three new salespeople. Additional staff appointments are also planned at Group level to support ongoing growth, including in the areas of people and culture, marketing and group IT infrastructure.

In Q2 FY2020, Alcidion signed new and recurring contracts with a total contract value of $3.5M including a number of significant UK contracts that were announced to the market before year end.

Total sold revenue out to FY2025 is $37.2M with $29.4M being product revenue and the remaining $7.8M being for services. The sales pipeline remains strong in ANZ and has continued to significantly improve in the UK over the last six months. 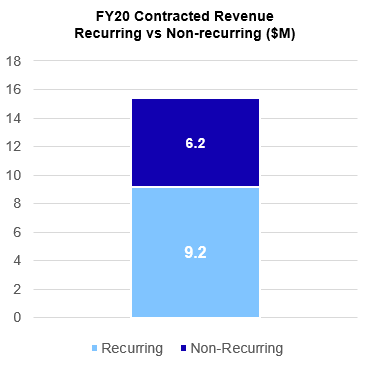 Miya Precision and Patientrack went live at two ACT Health campuses in Q2 FY202, as part of a five-year contract signed in Q1 FY2019 for Alcidion’s full product suite. The two products are successfully in-use across 600 beds at Canberra Hospital and the University of Canberra Hospital. Feedback from hospital staff has been positive. The Smartpage platform is also due to go live in FY2020.

In November 2019 the Company launched Miya MEMRe, a mobile Electronic Medical Record (EMR). The app is the first locally developed platform of its kind to offer full EMR mobile access. The platform is currently in use as part of a previously announced Proof of Concept (PoC) with eHealth NSW and was showcased in Q2 FY2020 at three healthcare industry conferences.

During the quarter, Alcidion signed several strategically significant contracts in the UK market providing important reference sites in the NHS. In December 2019 a three-year $500K deal was signed with Taunton and Somerset NHS Foundation Trust for Patientrack. Taunton is Alcidion’s first Global Digital Exemplar (GDE) Trust, a trust formally recognised by the NHS as an early digital adopter and responsible for establishing blueprints for other NHS trusts to follow. The pilot wards at Taunton are already live and delivering positive results to staff and patients. This ability to rapidly deploy Patientrack is a key differentiator in the UK, a market that wants to see early results from adoption of new technology. This was evidenced by five Patientrack sites going live, in the UK, during the quarter. Alcidion also signed a ~$1.9M contract with Dartford and Gravesham NHS Trust, an early adopter of best of breed solutions, to implement Better’s OPENeP solution. This is Alcidion’s first implementation of OPENeP since being appointed as a reseller of the solution in April 2019.

Other contracts include an extension to the existing Patientrack contract with University Hospitals of Derby and Burton NHS Trust, adding an additional hospital, valued at $260K over 2.5 years and a five-year $160K agreement with high-profile Queen Victoria Hospital for Alcidion’s Patientrack solution. Queen Victoria Hospital is a small specialist NHS hospital with an international reputation for pioneering burns and plastic surgery treatment techniques.

“The UK not only represents the largest potential market that we currently operate in; it is also an ‘early adopter’ of technology in healthcare with active encouragement from government. The outcome of the 2019 UK General Election has resulted in an improved operating environment, with policymakers promising significant increases in investment to support the entire NHS in achieving digital maturity. As a result, we are actively accelerating our growth strategy in this key market,” said Ms Quirke.

“The number of new contracts and renewals in the UK demonstrates Alcidion’s growing position in this territory. We continue to recognise new opportunities as well as the potential to upsell Miya to existing sites and those that have invested in digitalisation of their healthcare data and are looking to capitalise on the value of that data to transform healthcare delivery.”

In Q2 FY2020, Alcidion reported a net operating cash outflow of $1.8M in line with the increased investment taking place across the business and payments of deferred costs from the prior quarter. In addition, $238K was paid in Q2 FY2020 as the final contingent payment for the acquisition of Oncall Systems in February 2018.

The Company expects Q3 cash outflows to increase as a result of planned investments focused on accelerating growth, including product development, sales and marketing, and Group infrastructure to support planned growth, and UK market development.