Alcidion’s Managing Director Kate Quirke said, “Alcidion has continued to build on the momentum of FY21, adding $2.7M of new contracted revenue, including renewals, during what is historically the slowest quarter of the year, resulting in contracted revenue at the end of Q1 of $17.2M”.

“Our pipeline continues to develop with several sizable opportunities now entering the contract negotiation stage which has provided a heightened optimism about the broader opportunity for Alcidion, particularly in the UK market. We are increasingly seeing the potential to cross and up sell our products to existing customers.”

“We do however remain cognisant that COVID-19 continues to pose a challenge for healthcare providers worldwide resulting in longer lead times for contract completion.”

“Subsequent to the end of the quarter, we won a new contract in the UK for the ExtraMed patient flow platform at Queen’s Hospital Burton, which is the first new ExtraMed contract we have won following the acquisition in April 2021 and a cross-sell validation as Burton is a current user of Patientrack.”

“Following a competitive tender process, we won a new contract with Sydney Local Health District, an important reference site for Alcidion, for the use of Miya Precision in supporting virtual care monitoring along with the roll-out of Alcidion patient care app Miya Care. This is the first deployment of Miya Care, and we are excited by the potential this addition of patient entered information brings to the quality of data available to clinicians.”

“As announced in April, Alcidion was selected, as part of a Consortium, as the preferred provider for major health IT project across the Australian Defence Force. The contract is expected to be finalised before the end of the year, with the project commencing promptly thereafter.”

Building on Q4 FY21 momentum, Alcidion added $2.7M of new contracted revenue (including renewals) in Q1, of which $2.4M will be recognised in FY22.

At the end of Q1, contracted revenue able to be recognised in FY22 was $17.2M, representing a 17% increase on the same period last year. Contracted revenue only includes revenue (both recurring and non-recurring) from current signed contracts. It does not include the revenue from contracts that will renew during the next twelve months or are yet to be signed. 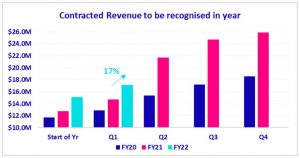 Cash receipts in Q1 were $6.6M, a 2.3% increase on pcp. The Company had an operating cash outflow of $3.4M, this reflects the full quarter impact of new hires in H2 FY21 coupled with the payment of FY21 staff bonuses in August (accrued for in FY21 results) and large net GST/VAT payments of $1.3M driven by strong FY21 Q4 receipts.

Alcidion experiences a level of seasonality in its cash flows with Q3 and Q4 historically being the strongest cash collection months. However, it should be noted that one of the major drivers of cash flow is contract wins which could occur at any point during the year. 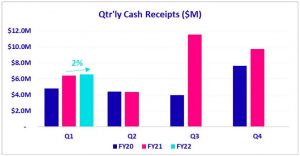 As noted in item 6 of the Company’s Appendix 4C, payments made to related parties and their associates totalled $264k for the quarter. The payments relate to Directors’ remuneration.

After the end of Q1, Alcidion signed three strategically significant contracts with a total TCV of $3.1M, of which $0.9M will be recognised in the current year.

IPFM is patient flow management software that enables frontline staff to make informed decisions based on real-time visibility of patient flow. The signing of this agreement follows positive results from use at Royal Derby Hospital where staff have successfully reduced lengths of stay and enhanced care for patients.

The second, a new three-year contract with Sydney Local Health District, having a TCV of approximately $1.8M, for the use of Miya Precision in supporting virtual care initially of acute diverticulitis patients via rpavirtual. Miya Precision will be the platform supporting virtual care across Sydney Local Health District capturing information from integrated devices along with patient entered information from Miya Care.

Sydney Local Health District provides a key reference site for Alcidion, highlighting the functionality of Miya Precision to be used in virtual care monitoring across hospitals in Australia. Miya Precision will enable innovative and scalable models of care to be eventually introduced for a broad range of patient cohorts with other chronic conditions both in hospital settings and the community.

The third, a $640k 3-year contract extension for ExtraMed’s IPFM Licence and support with Royal Derby Hospital. As indicated this hospital is the sister to Queen’s Hospital Burton and have documented success in reducing length of stay using the IPFM solution. The further extension of their licence and support agreement confirms the positive impact this solution is having on patient care.

During the quarter, the Company appointed Ms Victoria Weekes and Mr Daniel Sharp to the Alcidion Board as Independent Non-Executive Directors.

The appointment of both Ms Weekes and Mr Sharp demonstrates the Company’s ability to attract high calibre Directors to its Board and positions Alcidion strongly as it continues to deliver on its growth strategy following the achievement of multiple strategic milestones in 2021.

Alcidion Managing Director Kate Quirke will host an audio webcast with investors via Zoom this morning at 11:00am Australian Eastern Daylight Time (AEDT).

To register for the webcast, please follow this link: https://us02web.zoom.us/webinar/register/WN_B7L5A7ELRJuDQ4UUxDpnOg