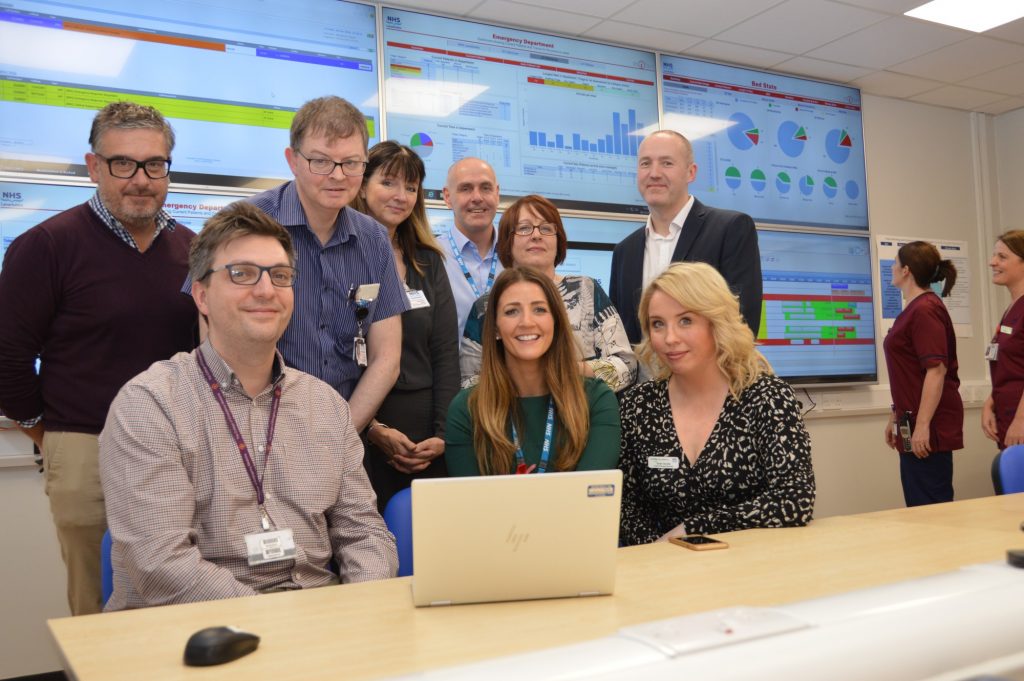 Alcidion’s Patientrack software is at the heart of a futuristic command centre that is transforming patient care in the Lanarkshire hospital.

You wouldn’t expect a hospital that was built over 40 years ago to be described as something akin to NASA. But chief nurse Karen Goudie can barely contain her excitement about a futuristic mission-control room giving her real-time information about her sickest patients.

Surrounded by screens that monitor patients’ vital signs – and can relay any deterioration to clinicians without the need for manual checks – the new system is slowly bedding itself in at the University Hospital Monklands in Lanarkshire. And with trials that have shown a higher than 98% success rate at spotting the patients in need of urgent intervention, the business case has been made to install Alcidion’s Patientrack system hospital-wide by the middle of next year.

Goudie, who has been a national clinical lead for older people – says the ‘e-OBS’ (electronic observations) system will go live throughout the hospital by the end of December and is set to dramatically improve patient safety.

She said: “This is a real game-changer for us. When I came to this hospital, we were at the beginning of a process to move to a new building, and part of the business case was to increase our focus on a digital strategy that would put us at the forefront of healthcare.

“I had experience of Patientrack at NHS Fife – where its implementation had a significant effect on reducing the rate of mortality. The board there had been an outlier in terms of cardiac arrest, but with Patientrack they have one of the safest hospitals in the country.”

A team from NHS Fife visited Monklands, which opened in 1977, to demonstrate the way Patientrack had worked for them, and it soon became clear that the system was potentially transformative for their colleagues in Lanarkshire.

“Before we embarked on that journey, we had to prove that we had an issue, in terms of the non-pick up of deteriorating patients. So, we did some investigations into that and found a compliance rate of under 40 per cent; a wise person once told me that if you had compliance rate under 80 per cent there’s chaos in your system.”

She added: “We’re very open and honest and transparent about what goes wrong, and we try to share that learning. All too often you could see that the failure to recognise deterioration was an issue. It was clear that either the scores were not being added up correctly or that patients were scoring high – in terms of the early warning system – but a response wasn’t happening.”

As they started to test Patientrack ward by ward, the compliance rate increased to over 98 per cent, and thus the evidence was clear. Now, the command centre, to give it its proper name, is able to display on live monitors where the sickest patients in the building are, and to alert a clinician. Next year, the e-OBS system will be added to with real-time ‘assessments’ – or monitoring – of patients with long-term conditions such as diabetes also due to be automated. The system also links to live lab results, speeding up the time-consuming process of relaying test data back to medics.

As for the nurses, they do not want to go back to the old paper-based observations, and they now conduct their rounds using iPads rather than pens.

Goudie says: “The nurses love it, and it’s been a real confidence booster as well. I think it has removed a lot of barriers; if a nurse is on a night shift they are under a lot of pressure. They might think something is not right with a patient, but they are not sure or maybe lack the confidence to make a call. This system just completely removes that anxiety, and it’s been brilliant to see.”

Not only that, but the system has returned many hours back to nursing, which allows Goudie to plan and focus on overall quality of care, and to determine what the hospital could do better.

A reference design for the new Monklands hospital has been approved by the health board, and is set to take physical shape in the next few years. Billed as Scotland’s ‘first digital hospital’, it too will feature an operational command centre to help clinicians build on the current prototype.

Goudie says they are also working with Alcidion to start looking at ways of using the ‘big data’ consumed by the system, in order to conduct analytics and start predicting demand.

I joke whether the NASA set-up will be upgraded to the Starship Enterprise, with a Captain Kirk-style swivel chair on the bridge. Goudie confesses she has already asked for an office overlooking the new centre, but says: “I don’t know about that, but if it can take us one step beyond that would be nice.”

This article was originally published in the FutureScot Magazine Winter 2020/21 Edition. View the original article here.

Previous Story
A year in review for the healthcare industry
Next Story
What will 2021 hold for digital health?